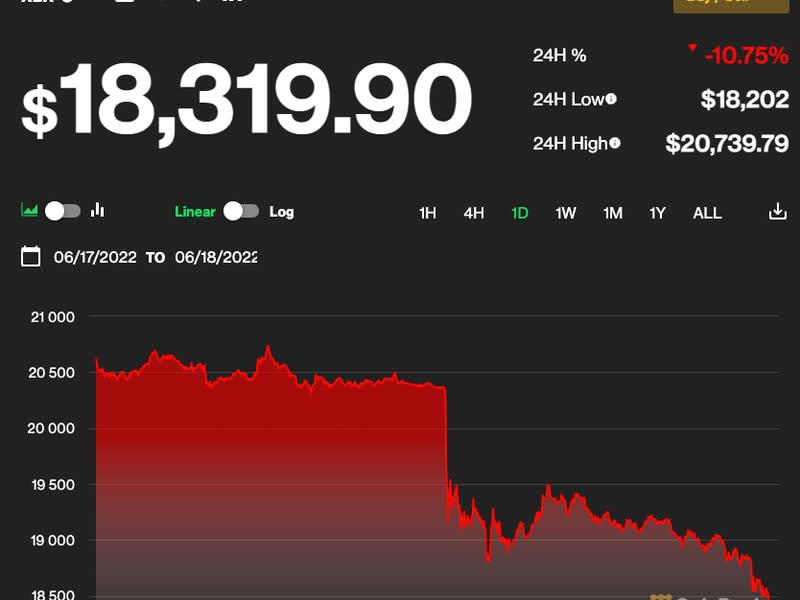 As of press time, bitcoin was trading at about $18,319 a coin, a 10.8% decline over the past 24 hours. Bitcoin’s market capitalization slumped to about $350 billion, a 73% decline from its November all-time high, according to CoinGecko.

The price drop of bitcoin also marks the breach of a significant price level – namely, bitcoin’s all-time high from the previous crypto cycle.

Some crypto traders have theorized that bitcoin would not fall below its previous cycle’s highs, a theory that held during the 2018 drawdown, but has now been disproven for the current cycle.

During bitcoin’s 2017 run up, bitcoin reached a then-high of $19,783 in December 2017 before falling back down to the four-digits range just one month later.

During the 2013-2014 cycle, bitcoin reached an all-time high of $1,127 at the time, a level that the cryptocurrency successfully defended during its 2018 drawdown.

Retail inflation for industrial workers rises to 6.97% in May

Long-time bull Cathie Wood warns investors about the ‘big problem’ in the economy. Here’s what she likes today