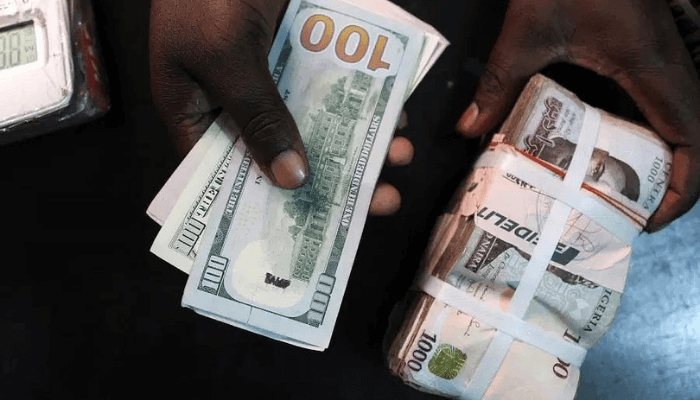 Nigeria’s naira fell further against the dollar to its lowest level ever at the parallel market on Friday, complicating the Central Bank’s efforts to rein in the rapid rise in the price of goods and services in the import-dependent nation.

The renewed demand pressure in the foreign exchange market has mostly come from politicians and some retail users, some traders told BusinessDay.

After trading on Friday, the exchange rate fell to N654/$, representing a 2.1 percent decline from N640/$ on Thursday.

At its current rate, the Naira has lost 15.75 percent of its value since the beginning of the year when it exchanged at N565 per dollar at the parallel market, popularly called black market.

“There is strong demand for dollars. Politicians are buying dollars and people are changing naira to dollars,” a trader from Festac said on Friday. While the dollar is available in some areas of Lagos, it is scarce in other areas.

The CBN also frowned at the conduct of unauthorized movement of funds within and outside the country and would use tools at its disposal to check the movement of illicit funds.

Olayinka Arewa, CFO, Parthian Partners, Africa’s premier inter-dealer broker, said part of the reason for the pressure on the parallel market is mainly due to political activities as the 2023 elections are fast approaching.

Other reasons include the increasing subsidy payments as oil prices continue to soar. The increasing costs of commodities on the international markets have also created pressure on importers to raise more forex.

“The CBN is obviously struggling to check the pressure but I believe that they can do this if they are determined,” Arewa said.

Read also: CBN clarifies stand on conversion of naira to dollar for electioneering

Muda Yusuf, the Chief Executive Officer, Centre for the Promotion of Private Enterprise (CPPE), said the FX scarcity is becoming more severe than before and this has increased the reliance of manufacturers on the parallel market, which is limiting their productivity and putting them under pressure.

However, at the Investors and Exporters (I&E) forex market, Naira appreciated by less than one percent as the dollar was quoted at N426.00 on Thursday as against the previous day close of N426.58. Most currency dealers who participated at the FX auction on Thursday maintained bids between N414.00 (low) and N444.00 (high) per dollar.

At the current rate, the naira has lost 0.9 percent of value against the dollar at the official market. The Naira exchange rate on the first trading day in 2022 stood at N422/US$ on the I&E Window.

The daily foreign exchange market turnover increased by 25.55 percent on Thursday to $180.83 million compared to $144.03 million recorded on Wednesday, data from the FMDQ indicated.

Should You Buy Matterport After Its Earnings Beat?