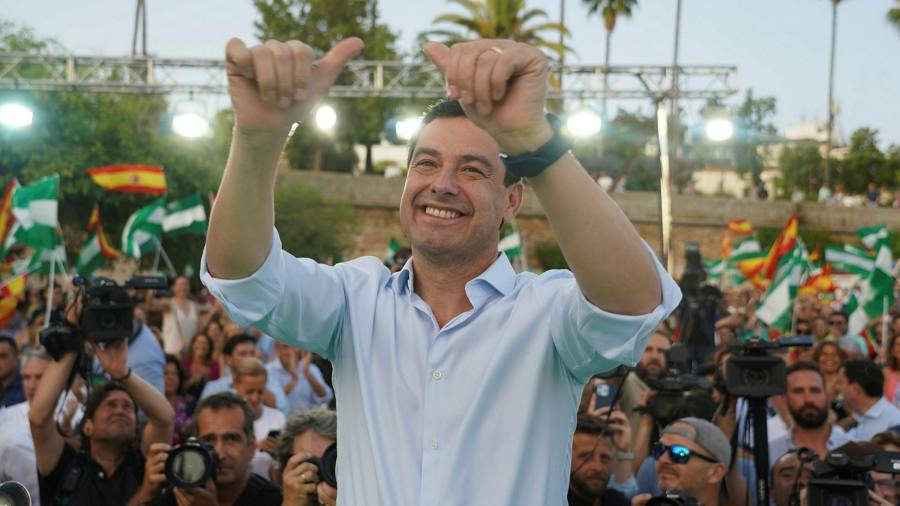 Spain’s conservative People’s party, the Partido Popular, inflicted a resounding defeat on the governing Socialists in a pivotal election in Andalucía on Sunday, securing an absolute majority in the regional government, according to exit polls.

The PP’s projected victory surpassed poll forecasts in a vote that was set to secure the party’s main ambition of forming a viable regional administration without having to depend on support from the hard-right Vox party.

An exit poll by national public broadcaster RTVE showed the PP winning 58-61 seats, comfortably above the 55 seats needed to secure an absolute majority in the 109-member regional assembly. Prime minister Pedro Sánchez’s Socialists were projected to win 26-30 seats and Vox 13-15.

The PP’s victory in Andalucía, Spain’s most populous region and a former Socialist stronghold, marks a decisive advance for the party ahead of municipal and regional ballots that culminate in a general election scheduled for the end of next year.

Alberto Núñez Feijóo, who took over as PP leader in April, has sought to demarcate his party from the anti-immigration Vox and establish himself as a moderate opposition leader ready to replace Sánchez as prime minister.

Antonio Barroso, deputy director of research at Teneo, said “the PP seems to be gaining increasing momentum, and voter concerns about inflation might make it more challenging for Sánchez to sell his government’s achievements in the next legislative election”.

Inflation in Spain reached 8.7 per cent in May and soaring fuel prices have triggered protests as Sánchez’s Socialist-led government grapples with the economic impact of war in Ukraine.

The PP campaigned for a regional administration with “free hands”, meaning not dependent on Vox. But Macarena Olona, the leading Vox candidate, insisted her party would demand senior positions in return for support if the PP fell short of an absolute majority.

In February, Vox won 18 per cent of the vote in elections in Castile-León in north-west Spain, entering a regional government for the first time by becoming a junior partner in a coalition with the PP.

The Socialists held office in Andalucía for 36 years until they were defeated by a right-of-centre coalition in the previous election in 2018. Vox, formed by PP dissidents in 2013, failed to win a seat when it first ran in the region in 2015.

We must stop sleepwalking towards a surveillance state